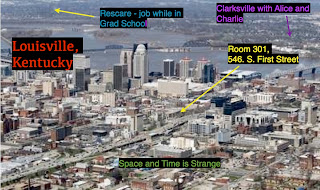 Yesterday's Courier Journal had an aerial of downtown Louisville on its front page.

The photograph threw me into nostalgia because this Kentucky space and location were central to 15 years of my life. In one shot, there was the background of New Albany, Indiana, where I worked in a group home with seven adult men with disabilities. I spent most of my evenings and weekends in that area so I could afford graduate school. There was, of course, the Brown School up against I-65, where I lived with 600 students and my teaching friends for many long, long days (and the streets we often walked with the outdoor classroom). For over ten years, that is where my truck parked and my responsibilities resided.

Then there was the small pocket of homes where I moved across from Louisville (taking the last train to Clarksville) to live near Alice and Charlie. The 2nd Street Bridge was my gateway to and from work and my daily heartbeat - the pulse - was established in this one scene. The 2nd Street Bridge was also the arch to the Irish Rover. To the right of the photo is where Sue and Dave lived (and Nancy's bagels were baked). It was also the hub of Friday nights for a beer with my best friends there.

I think it is strange to see an aerial photograph like this because when on the ground, it is easy to forget how insane space and time actually are. I was but a piece of dust in this larger landscape - the bigger mechanism of downtown, city life makes my daily schedule seem ant-like. The photo could be taken from an even higher angle and I would feel even smaller. Such a photo makes me think that the life I was able to live in a larger universe was miraculous and fortunate indeed.

And now, in Connecticut, I'm sure there's additional landscapes to capture my routines. In Syracuse, too, I might map out my reality from the streets and buildings I most inhabited.

My point. A bird's eye view puts it all into perspective.

Life's but a walking shadow...a poor player who struts and frets his hour upon the stage.
Posted by Bryan Ripley Crandall at 6:00 AM 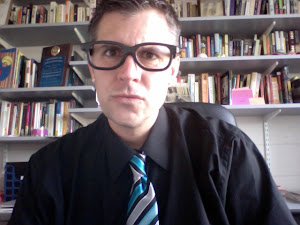